“The Cephalopod Brothers”
Tokushima Kenjiro and Takahashi Tenma are mercenaries. They were seriously injured by bomb fragments during one of their mission but were later rescued by Kanagawa’s largest underworld organization, “Black Rock Gang” and soon became assassins for the organization.

Tokushima Kenjiro:
Tokushima Kenjiro was a mercenary. His brain was seriously injured by bomb fragments during one of his mission. Although he was safe by “Black Rock Gang”, some of the bomb fragments are still in his brain so he has to endure immense pain all the time. Hence, in order to stay painless and comfortable, he has to inject drug into his body.
Later, he has choose to work for Kanagawa’s largest underworld organization, the “Black Rock Gang” as an assasin so that the gang can continue to provide drug that he needs desperately to ease his dire pain. Basically he has become a killing machine puppeteer by drug provided by the gang.

Gregory Yefimovich Rasputin (Russian Demon Monk):
He is a priest in his thirties and he has unique skills in spreading prophecies and perform unique magical medical healing techniques. He has superb hypnotic eyes. He was called the immortal “Demon Monk Rasputin” because he has strangely resurrected despite being murdered for numerous times. The Kanagawa Iwako Institute of Technology has mastered the genetic technology and successfully transplanted the gene of “Demon Monk Rasputin” into Tokushima Kenjiro’s body.

《Takahashi Tenma / Uesugi Kenshin (Sengoku Genera) Gene Transplanter》
Takahashi Tenma:
He was once a wanted criminal. Later he met Tokushima Kenjiro and became a mercenary. During a mission with Tokushima Kenjiro, Takahashi safe Kenjiro’s life by protecting Kenjiro from a strong explosion and consequently the bomb fragments had seriously injured his heart. He was later rescued by Black Rock Gang’s Kanagawa Iwako Institute of Technology. Currently he is survived by a special heart instrument on his chest.

Uesugi Kenshin (Sengoku Genera)
A famous general in the Japanese warring states period. Nagao, the guardian of the Echigo Kingdom, was the youngest son of the King also name as Tiger Chiyo. When he became an adult, he was called Nagao, the name of Echigo. Because he was as powerful as God in the battlefield, he was called “God of War”. Kanagawa Iwako Institute of Technology has mastered this genetic technology and successfully transplanted it into Takahashi Tenma. 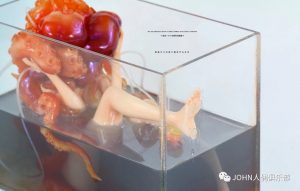 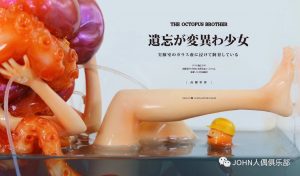 《Mutant Cephalopod Girl / Takahashi Tenma’s Sister / Takahashi Risa》
Takahashi Risa is the younger sister of Takahashi Tenma and she was also a member of the mercenary who performed missions with Tokushima Kenjiro. During a mission, Takahashi Risa was captured and a bomb was installed on her body. Tokushima Kenjiro and Takahashi Tenma failed to dismantle the bomb in time before it exploded. The three were injured by the bomb fragments and Takahashi Risa was injured the most.
Black Rock Gang managed to rescue the three of them and sent them to Kanagawa Iwako Institute of Biology for treatment. They became the institute first experimenters of soft cephalopod biological equipment helmets. Due to the instability of helmet to female experimenter, the cephalopod gene in Takahashi Risa’s body mutated. She was currently kept and taken care of inside a laboratory glass tank by Kanagawa Iwako Institute of Biology.

The exclusive item “Mutant Cephalopod Girl” is available to opt-in for early bird only.

There are no reviews yet.