KOZA was a kid born in HZ63 district.

When he was young, his parents stole Yan Energy and sold it in order to survive, but Satan turned them into Yan Energy, and KOZA, who lost his parents suddenly, was forced to live on the streets. He silently vowed in his heart that when he has enough power in the future, he will save his parents and reunite the whole family again.

One winter afternoon, KOZA, who was starving and cold, broke into the bakery and stole bread when the bakery was about to close. Unexpectedly, he was caught by the boss and was severely beaten. After witnessing everything, an old man known as “Iron Tiger” decided to take KOZA back to the Iron Tiger Machinery Factory to take care of them. The two made a living by scavenging metal waste.

In the days of the machine factory, Grandpa Iron Tiger regarded KOZA as his son and taught him how to reshape scrap metal into various machines. At the same time, KOZA is constantly looking for ways to strengthen and bring back their parents. When making an engine, he realized how to convert thermal energy into mechanical energy. With an idea, KOZA began to try to apply this technology to thermal mecha equipment. After numerous experiments and failures, he finally succeeded in creating his own weapon.

Now, with strength and new equipment, KOZA is preparing to participate in the annual HELL RACING, and only wants to redeem the parents who were converted into Yan Energy… 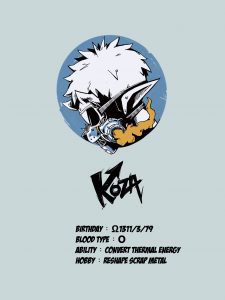 There are no reviews yet.

Be the first to review “GAKI RACE – #1 KOZA” Cancel reply